Located in the Broadlands Village Center, Charminar is the newest addition to the crowded Indian restaurant scene in Ashburn, VA.

I was looking to redeem my recent bad Chettinad experience at Karaikudi Centerville and jumped when an opportunity came up to dine at Charminar Indian restaurant in Ashburn.

Unless you are completely ignorant about India, you know the restaurant is named after the magnificent Charminar monument in old Hyderabad city in the South Indian state of Andhra Pradesh.

Like most Indian restaurants in Ashburn, VA, Charminar offers all-you-can-eat buffet ($9.99) for lunch and a la carte menu for dinner.

Since I was there during lunch time, I opted for the buffet. 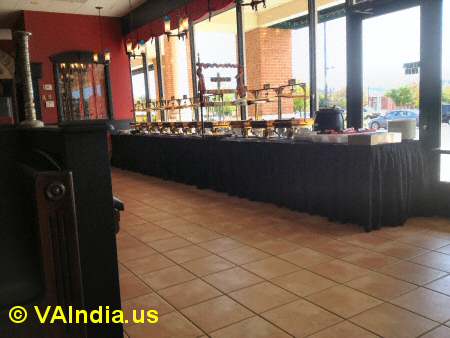 Buffet Counter
Buffet counter was well laid out by the wall and, overall, the restaurant presented a neat appearance.

No labeling of what vegetable is in it.

Not sure if even the chef knew what vegetables he put in.

While it tasted overwhelmingly tangy it threw me off with its below warm temperature and sweetness.

There was not even a tinge of spice.

Icy cold Batata Vada: The label read &#34Batata Vada" but I found a few "Onion Pakoras" in the container as well.