How awful Indian restaurants like Delhi Dhaba continue to exist is a mystery known but to God!

After a depressingly bad meal at Delhi Dhaba, I was driven to despair that Man could be so cruel as to serve such crappy food to a fellow Human.

I found myself on Wilson Blvd around 2PM the other day when I spotted this restaurant.

Unlike a lot of Indian restaurants in Virginia, Delhi Dhaba offers only lunch specials during weekdays. Lunch buffet is available only during weekends.

Lured by the slogan "The Original Tandoor Cuisine" on the takeout menu, I ordered both lunch specials.

For the $6.50 lunch offer, I picked Chicken Methi, Chicken Tikka Masala and Rice.

Here's the sorry tale of my Delhi Dhaba's meal:

The serving size of both Chicken curries were small.

Chicken Tikka Masala is a common fixture at most Indian restaurants. Kinda like Omelette at an American Diner.

You'd think it'd be easy not to mess this simple dish up.

Yet the noobs in Delhi Dhaba turned this dish into a Himalayan disaster that brought tears to my eyes.

The Chicken pieces were chewy and gristly and the sauce was way too sour.

Eating this inedible dish was a torture I'd not wish even on my most bitter enemies. 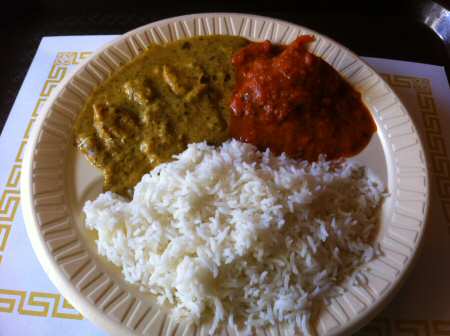 Are green chilies that expensive in Virginia?

In its favor, the chicken pieces were tender.

But the Methi flavor was far too subtle.

Plain rice was warm and I had no issues with it.

Bemoaning my Chicken misadventures, I moved on to the $9.95 Vegetarian lunch special. 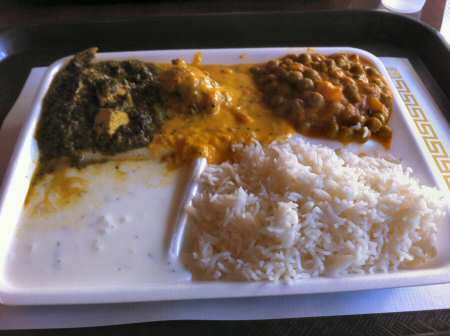 Alu Mutter suffered from far too much turmeric powder.

The sole saving grace of the sour Kadi Pakora (with just one Pakora) was its small serving size.

With a surfeit of turmeric powder, I could not put more than two spoons of Alu Mutter in my mouth. It was that abominable.

Raita included some raw onion pieces but the yogurt was so sour that I just could not eat it and had to toss it into the trash along with other inedible Delhi Dhaba curries.

The sole saving grace of my otherwise horrid meal was Saag Paneer.

Although not the best Saag Paneer I've had, it was better than the sour Kadi Pakora and Turmeric-rich Alu Mutter.

Saag Paneer was well cooked and Paneer cubes were soft. 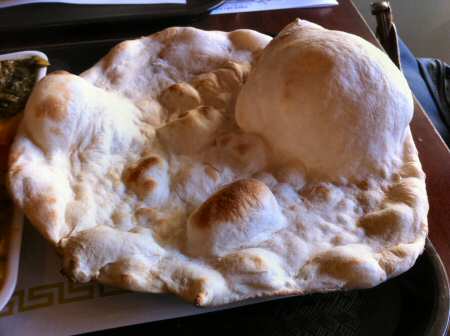 Naan Bread
It was big but very dry. I like my Naan bread with a bit of butter daubed on it.

Naan bread too quickly made its way into the trash.

Located between North Barton St and North Adams St on Wilson Blvd in Arlington, Delhi Dhaba has no ambiance to speak off.

Dining hall is to the left of the food counter. The reverse L shaped dining hall was clean, had three big screen TVs on the wall playing Zayed Khan, Akshay Kumar songs from the horrid Bollywood film Blue.

Some of the tables were not clean and had used napkins.

Delhi Dhaba was empty save for one diner when I entered. Later, three more diners came in. 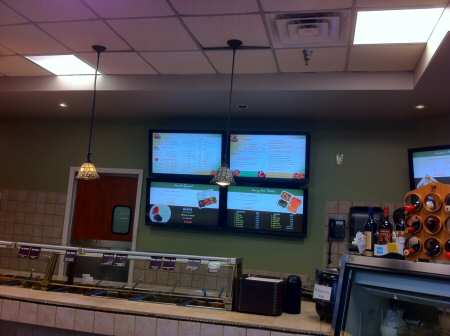 Delhi Dhaba Food Counter
You walk upto the counter, look at the menu on the screen above the food counter or pick up a paper menu and place your order.

If it is dine-in, you get a number slip and wait at a table for your food to be ready. Once the food is ready your number will be called out for you to pick it up.

Food is served in styrofoam plates. Plastic cutlery and napkins are available in the dining hall.

While I felt miserable eating the Delhi Dhaba curries, I must say the restaurant deserves special credit for maintaining a very clean restrooms with pleasant odor.

Restrooms are to the right of the food counter.

Delhi Dhaba Rating - Not Worth It

I tried five different curries and most of them were pitiful.

Also, Delhi Dhaba is not value for money considering that you can get all-you-can-eat 15-item lunch buffet with appetizers and desserts at a lot of Indian restaurants for $10 or $11.

If ever I am on Wilson Blvd and feel an urge to relieve bladder pressure, I will definitely pop into Delhi Dhaba to use its clean restrooms.

But I do not intend to revisit Delhi Dhaba any time soon for its food. - © VAIndia.us