Most Indian restaurants that we've graced in the commonwealth of Virginia serve abominable food and dole out poor service.

But rare are the ones like Minerva Express on Lee Hwy in Arlington that serve food utterly unsuitable for human consumption.

Be it Idli, Vada, Masala Dosa, the Chilli Paneer takeout (more about this mishap later) or the hopeless service, our Minerva Express experience was a nonpareil horror-show.

Food was so bad that even our bellowing stomachs rebelled at the monstrosities that landed on our plates.

Adding to the whacko-quotient of the place, a fellow (employee??) was sound asleep on the adjacent chairs. No kidding (see picture below).

Only in an Indian restaurant will you find people sleeping on the chairs during working hours while customers are eating at adjacent tables.

We ended up at Minerva Express by accident.

The other day we stopped at A-1 Grocery on Lee Hwy to pick up some Indian wheat flour.

As we were paying for the wheat flour, Dhania and Asafoetida, we noticed attractive images of Idli, Vada and other India food items near the grocery store counter.

It was late in the afternoon and pictures of Indian food have a hypnotic effect that invariably sends us into a drooling fit.

We quickly made our way to the restaurant side of the store, placed our order for Idli-Vada combo and Masala Dosa for dine-in and Chilli Paneer for takeout.

Our dine-in order of Idli-Vada arrived at our table in 10 minutes, followed a few minutes later by the Masala Dosa.

Dear reader, never has our tender soul experienced such atrocity, endured such agony.

Folks, we grew up eating Masala Dosas hailing as we do from South India.

We have gorged on Masala Dosa on countless occasions - at home, at restaurants like Saravanaa Bhavan, Saravana Palace, Woodlands, at parties, functions and even in Hindu temple canteens like Flushing Ganesh Temple Canteen, Aurora Balaji Temple Canteen and Chicago Rama Temple Canteen.

What bread is to Americans, Dosa is to South Indians. A staple food. 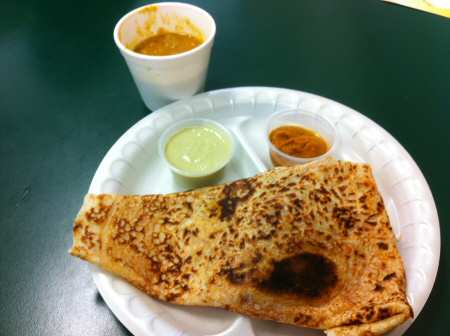 Burnt, Horrid Masala Dosa (Not Photoshopped)
But never such a vile looking, burnt, tasteless abomination as the Masala Dosa served by Minerva Express in Arlington touched our lips.

It was as if Hitler's Nazi camp guards and Stalin's Gulag guards plotted together in a bizarre torture experiment on my palate.

It comes packed with a mild fermented taste of finely ground black gram dal and rice.

But the Minerva Express's Masala Dosa was soft, burnt in part and, worse, tasted like stale wheat flour/maida flour crepe.

Masala Dosa came with Potato curry filling and a sprinkling of Chutney Powder that tasted eerily like it came out of a MTR packet. To be fair, the Potato filling was palatable but we did not enjoy it as the Masala Dosa itself was a horrid travesty.

Our Idli-Vada combo included three Idlis and one Medhu Vada. 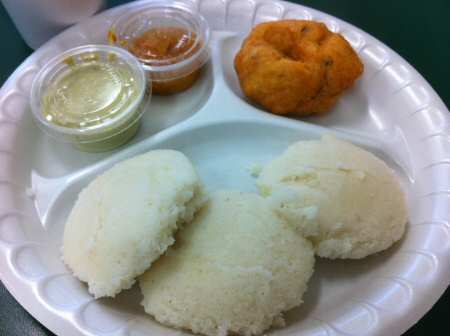 Hard Idlis (bottom), Rubbery, Cold Medhu Vada
Idli was hot and that's all we can say in its favor.

Idli was hard, not soft and light as it must be.

Ah, if that were its only sin!

Mon dieu, it felt like eating steam cooked lentil-rice flour as no salt was added.

It was cold and rubbery.

If we were blessed with better sense, we'd have avoided it as the pre-made Vadas were cozily snoozing at the food counter along with Samosas.

The callous, inept guys in Minerva Express's kitchen did not even care to heat up the Medhu Vada before serving it to us.

How cruel can you be? Whoever said Man is Wolf to Man had it right!

Both my Idli-Vada combo and Masala Dosa came with Chutneys and Sambar. 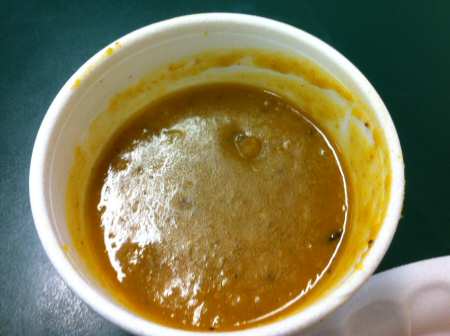 Sambar - Only in Name
Both Coconut Chutney and Ginger Chutney were served straight from the refrigerator and, obviously, cold.

Still, the Chutneys were alright when compared to the other crap on our table. Coconut Chutney was mildly spiced and Ginger Chutney had a subtle flavor of Ginger.

Nevertheless, we did not relish either of them as they were served cold on a freezing winter afternoon.

Sambar was far too thick to merit the appellation Sambar.

It looked and tasted like Dal with Drumstick and Carrot. It lacked the customary Tamarind and spices like Dhania that make Sambar a fine accompaniment to Masala Dosa, Idli or Vada.

We'd also placed a takeout order for Chilli Paneer along with Idli-Vada and Masala Dosa.

Since we found Masala Dosa, Idli and Medhu Vada utterly inedible and not meant for human consumption, we tossed them in the trash where they belonged and headed to the counter to pick up Chilli Paneer and pay the bill.

As we were about to pay up, the Indian guy at the counter with the face of a hyena and the behavior of a simian that's stumbled on a heap of bananas, quickly ejaculated, "Oh, you ordered Chilli Paneer. I completely forget."

Casting a crazed look in our direction, the fellow displayed his sharp incissors and yelped, "You give five minutes?"

Aghast by his carelessness and politely declining his request, we paid for the Idli, Vada and Masala Dosa and stepped out of Minerva Express vowing never to return.

There was no excuse for forgetting our Chilli Paneer takeout order. You see, we were the only customers Minerva had for much of the 45 minutes or so that we have spent there.

Two other diners came after we started digging into our Idli, but they just picked the precooked Samosas and Vadas.

Minerva Express on Lee Hwy in Arlington is worse than the typical Indian dump. 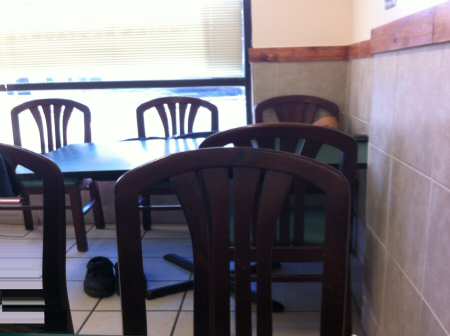 Man Sleeping on Adjacent Chairs, Hands and Shoes Visible
It has no ambiance to speak off.

As you enter the A1 Grocery store, Minerva Express is right behind the grocery store cash counter. It has about five tables.

But on the day of my visit only three tables were available. A sleeping man occupied three chairs and a table by the window facing the road (see the above picture).

Yet another table with a single chair was in disarray. Also, it was too close to the sleeping man by the window.

Tables were sticky suggesting infrequent and poor cleaning of the table. 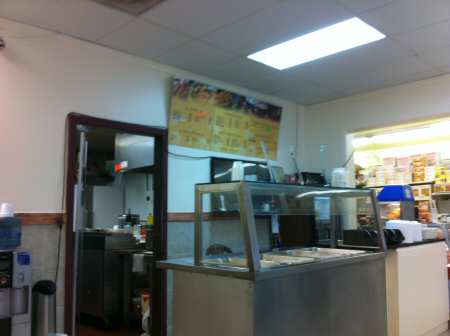 Minerva Express - Food Counter
Much of the food counter was empty except for some precooked samosas and vadas.

Food was served in styrofoam plates with plastic cutlery, napkins and water.

As we were getting ready to leave, the Sri Lankan cook with the Afro-hair-do sidled up to us and whispered sotto voce (in a low vice), "I know you didn't like the food. I'm sorry."

We were stunned to hear the apology and mumbled, "Don't worry."

We wondered if he'd seen us trashing the food!

We felt rotten over his repeated apologies but just smiled at him.

By the way, the prices we were charged by Minerva Express were far higher than mentioned on the menu card handed to us.

Minerva Express is a revoltingly disgusting Indian restaurant that ought not to be in business. - © VAIndia.us